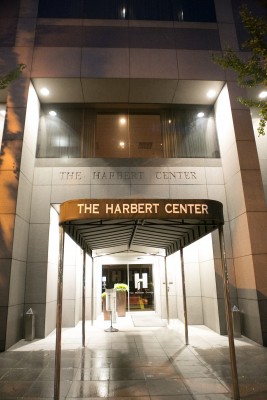 In the early 1980’s, members of area civic clubs recognized the need for a facility which would provide office space and become a permanent meeting location for civic organizations. Hall W. Thompson and John M. Harbert, III spearheaded the effort to seek donations and plan construction of the facility. Building The Harbert Center became a community project as the members of the Rotary Club of Birmingham, Kiwanis Club of Birmingham and the Monday Morning Quarterback Club jointly raised the funds needed to complete the construction and furnishing of the building.

Named to honor John M. Harbert, III for his involvement in the project, The Harbert Center opened on June 16, 1986.  Since that time, The Harbert Center has been the home of a number of civic and professional organizations, and has hosted many memorable community events.

The continuing contributions of those founding organizations, as well as the Birmingham  Sunrise Rotary, Birmingham Venture Club, Rotaract Club of Birmingham, The Women’s Network, Birmingham Estate Planning Council, Downtown Democratic Club, Birmingham Chapter of the American Marketing Association, Redstone Club, Institute of Internal Auditors, and the CFA Society of Alabama ensure the long-term upkeep of the building and its furnishings.

The Civic Club Foundation, governed by a Board of Trustees made up of representatives of civic organizations and the community, owns the building. Center Management, Inc. is responsible for day-to-day operations of the office space and the function facilities. Food service for all events held in the center is provided by Southern Foodservice Management, Inc., which is a Birmingham-based national food service management contractor.